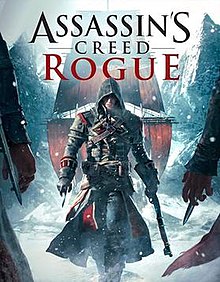 Assassin’s Creed Rogue is an action-adventure, stealth game set in an open world environment and played from a third-person perspective. Naval aspects from previous games return with the player controlling Shay’s ship, the Morrígan. The Morrígan has a shallower draft compared to Edward Kenway’s Jackdaw from Assassin’s Creed IV: Black Flag, allowing for river travel.New features include new ship-based weapons such as releasing an oil slick which can then be ignited, Puckle guns, and the ability for enemies to board the Morrígan during ship-to-ship combat. The arctic environment also features into naval gameplay and exploration, as certain icebergs can be rammed with an icebreaker.The underwater diving missions featured in Black Flag do not exist as swimming in the North Atlantic causes the player’s health to rapidly deplete due to the frigid water.