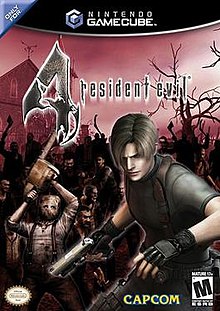 Resident Evil 4, known in Japan as Biohazard 4, is a survival horror game developed and published by Capcom. The sixth major installment in the Resident Evil series, it was originally released for the GameCube in 2005. Players control U.S. government special agent Leon S. Kennedy, who is sent on a mission to rescue the U.S. president’s daughter, whom has been kidnapped by a cult. In rural Spain, Leon fights hordes of villagers infected by a mind-controlling parasite, and reunites with the spy Ada Wong.