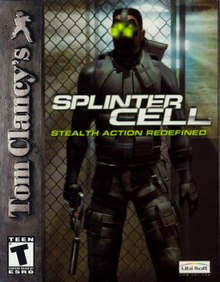 Tom Clancy’s Splinter Cell is a 2002 stealth video game developed by Ubi Soft Montreal and built on the Unreal Engine 2. It is the first game in the Splinter Cell series. Endorsed by author Tom Clancy, it follows the activities of NSA black ops agent Sam Fisher. The character of Fisher is voiced by actor Michael Ironside. The game was inspired by the Metal Gear series.