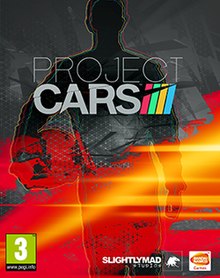 Project CARS is a motorsport racing simulator video game developed by Slightly Mad Studios and published and distributed by Bandai Namco Entertainment. It was released in May 2015 for Microsoft Windows, PlayStation 4, and Xbox One. Project CARS was originally also due for release on Linux, the PlayStation 3, Xbox 360, and Wii U but it was later announced that these versions had been cancelled.