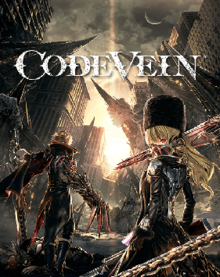 Code Vein is an upcoming action role-playing video game developed and published by Bandai Namco Entertainment for PlayStation 4, Xbox One and Microsoft Windows.

Initial game start may take a while on a few older PC
configs – be patient.

– Block the game\’s exe in your firewall to prevent the game from
trying to go online ..
– If you install games to your systemdrive, it may be necessary
to run this game with admin privileges instead

Based on CODE.VEIN-CODEX ISO release: codex-code.vein.iso (32,999,964,672 bytes)
4 DLCs are included and activated
Steamworks Fix, allowing multiplayer via Steam with the same crack owners, is available in NoDVD folder after installation – thanks to deadmau5 and BzinhoGames!
100% Lossless & MD5 Perfect: all files are identical to originals after installation
NOTHING ripped, NOTHING re-encoded
Selective Download feature – you may skip downloading and installing of credits video
Significantly smaller archive size (compressed from 30.7 to 21/22 GB, depending on selected components)
Installation takes 20-35 minutes (depending on your system and selected components)
After-install integrity check so you could make sure that everything installed properly
HDD space after installation: up to 31 GB
Use corresponding BAT-files in the game root to run the game in the language you want
Voiceovers language can be changed in game settings
Repack uses XTool library by Razor12911
At least 2 GB of free RAM (inc. virtual) required for installing this repack