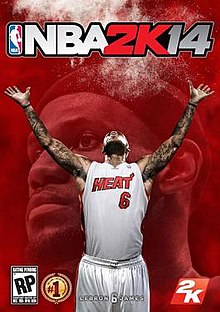 NBA 2K14 is a basketball video game developed by Visual Concepts and published by 2K Sports. It was released on October 1, 2013, for Microsoft Windows, PlayStation 3, and Xbox 360, and the PlayStation 4 and the Xbox One versions were released on the consoles’ respective launch dates. LeBron James of the Miami Heat became the cover athlete, and also served as the music curator for the game. 2K Sports also released the DLC pack that as a bonus for pre-ordering the game, they would receive 10,000 VC, bonus content for “Path to Greatness” mode, adding James in the Blacktop mode and a signature skill for MyCareer mode. On August 14, 2013, 2K Sports announced that Crew Mode would return to this year’s installment of NBA 2K. NBA 2K14 is the successor to NBA 2K13 and was succeeded by NBA 2K15 in the NBA 2K series.