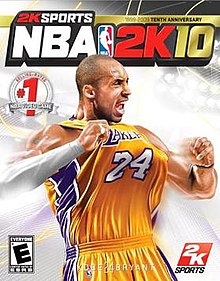 NBA 2K10 is a basketball simulation video game developed by Visual Concepts and published by 2K Sports. It was released in October and November 2009 for Microsoft Windows, PlayStation 3, PlayStation 2, PlayStation Portable, Xbox 360, and Wii. The eleventh installment in the NBA 2K series, it is the successor to NBA 2K9 and the predecessor to NBA 2K11. Kobe Bryant of the Los Angeles Lakers is the cover athlete of the game. NBA 2K10 is the first game in the series to be released for the PlayStation Portable and Nintendo Wii platforms; it is also the first game in the series to be released on a Nintendo console since NBA 2K3 was released for GameCube.