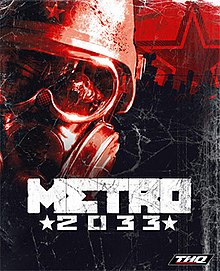 Metro 2033 is a first-person shooter survival horror video game developed by 4A Games and published by THQ. It was released in 2010 for the Xbox 360 and Microsoft Windows. The story is based on Dmitry Glukhovsky’s novel of the same name, and is set in the ruins of Moscow following a nuclear war, where the survivors are forced to live in underground metro tunnels.