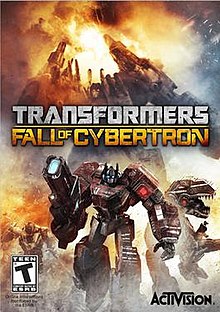 Transformers: Fall of Cybertron is a third-person shooter video game developed by High Moon Studios and published by Activision. It is the sequel to the 2010 video game Transformers: War for Cybertron, and directly follows the events of that game as the Autobots struggle to defeat their Decepticon foes in a war for their home planet of Cybertron.