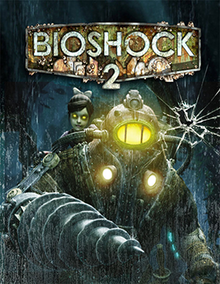 BioShock 2 is a first-person shooter video game developed by 2K Marin and published by 2K Games. A part of the Bioshock series, it is the sequel to the 2007 video game BioShock and was released worldwide for Microsoft Windows, the PlayStation 3, and the Xbox 360 on February 9, 2010. Feral Interactive released an OS X version of the game on March 30, 2012.