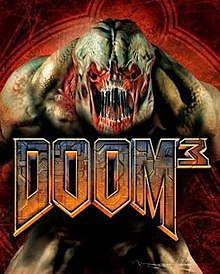 Doom 3 (stylized as DOOM3) is a survival horror first-person shooter video game developed by id Software and published by Activision. Doom 3 was released for Microsoft Windows on August 3, 2004. The game was later adapted for Linux, as well as being ported by Aspyr Media for Mac OS X. Developer Vicarious Visions ported the game to the Xbox, releasing it on April 3, 2005. Developer Splash Damage assisted in design for the multiplayer elements of the game.