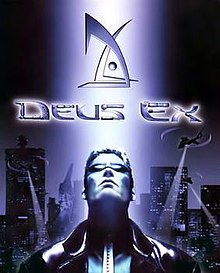 Deus Ex is a 2000 action role-playing video game developed by Ion Storm and published by Eidos Interactive. Set in a cyberpunk-themed dystopian world in the year 2052, the story follows JC Denton, an agent of the fictional agency United Nations Anti-Terrorist Coalition (UNATCO), who is given superhuman abilities by nanotechnology, as he sets out to combat hostile forces in a world ravaged by inequality and a deadly plague.