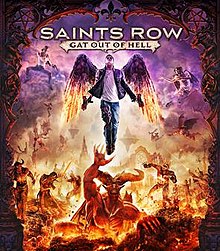 Saints Row: Gat out of Hell is a 2015 open world action-adventure video game developed by Volition and High Voltage Software, published by Deep Silver and distributed by Square Enix in North America. It was released for Microsoft Windows, Linux, PlayStation 3, PlayStation 4, Xbox 360, and Xbox One. The game, serving as an epilogue to Saints Row IV, is a standalone expansion, meaning players do not need a copy of Saints Row IV to play Gat out of Hell.