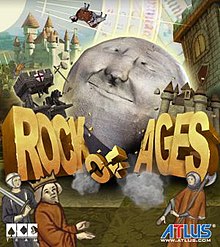 Rock of Ages is a tower defense racing video game developed by ACE Team and published by Atlus USA. It uses the Unreal Engine 3. The game was released for Xbox 360 in August 2011, for Microsoft Windows in September 2011, and for PlayStation 3 in May 2012.